Crab Topped White Fish features a seasoned and grilled White Fish fillet topped with a grilled crab topper and served on a bed of rice with two sides and a breadstick. It has 310 calories and costs $7.99.

The Lobster and Crab Platter includes one crab cake, 6 lobster bites, 6 shrimp, and 2 Batter Dipped Fish fillets, all served with your choice of two sides and hush puppies. The Ultimate Lobster & Crab Platter carries a suggested price of $8.99.

The Lobster Bisque is a cream based soup made with real, North Atlantic cold-water lobster. A regular Lobster Bisque has 200 calories and costs $3.49.

You can find the Lobster and Crab Celebration at participating Captain D’s locations nationwide through September 22, 2019. 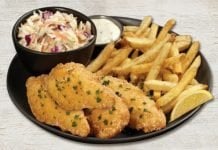