IHOP is hopping on the crispy fried chicken bandwagon with the release of their new Buttermilk Crispy Chicken menu featuring crispy chicken made with all-natural white chicken breast and a signature seasoning blend.

Chicken and Pancakes is the only menu item that costs $6.99. Signature Chicken & Bacon Cheddar Waffles carry suggested price of $11.99, while Chicken & Waffles go for $9.29.

Have you tried the new Chicken and Pancakes at IHOP? Please share your thoughts in the comments below. 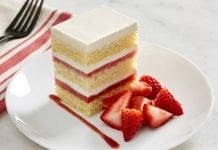