McDonald’s looks to build on the success of The Travis Scott Meal with the launch of the new J Balvin Meal.

For a limited time, McDonald’s is bringing fans the “Vibras” by adding J Balvin’s go-to order to their U.S. menu.

The J Balvin Meal features all of his favorites, including a Big Mac sandwich, medium World Famous Fries with ketchup, and an Oreo McFlurry for dessert.

Just like The Travis Scott Meal, which was available from September 8 through October 4, the J Balvin Meal will only be available for a limited time at participating restaurants nationwide from October 5 through November 1, 2020.

Prices may vary depending on where you live, but fans who order the J Balvin Meal as an offer on the McDonald’s app will get the Oreo McFlurry for free.

The new meal is available to order in restaurants for carry-out, at the Drive Thru, via McDelivery or through the chain’s mobile app.

McDonald’s says “this is only the second time a celebrity’s name has been featured on the McDonald’s menu since 1992.”

Before introducing the J Balvin Meal, McDonald’s launched The Travis Scott Meal in September 2020 and the Michael Jordan Meal back in 1992.

What do you think about the new J Balvin Meal at McDonald’s? Let us know in the comments below. 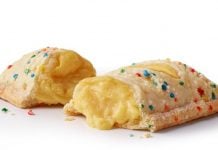