You can also swap out the Crunchy Tacos for any of the following menu items:

The $10 Cravings Pack is available now at participating Taco Bell restaurants nationwide for a limited time. Prices may vary. 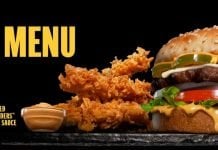