TGI Fridays brings the sizzle with the launch of the new Sizzling Entrees at participating locations.

Sizzling Chicken and Cheese comes with garlic-marinated chicken breasts, served over melted cheese with onions, red and green bell peppers, and mashed potatoes. This item is 1160 calories and costs $16.48.

Sizzling Whiskey-Glazed Flat Iron Steak features 8-ounces of flat iron steak dipped in a whiskey glaze, served over cheese with onions, mashed potatoes, and red & green bell peppers. All topped with Cajun-spiced onion strings and served with a Whiskey-Glaze on the side for dipping. This item is 1380 calories and costs $18.98.

The new Sizzling Chicken and Shrimp Alfredo includes garlic-marinated chicken breasts served with shrimp and fettuccine tossed in a creamy Alfredo sauce with Romano and Parmesan cheese. This menu item is available for a suggested price of $16.98 and has about 1720 calories. 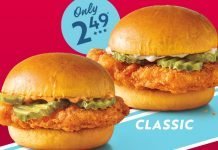