Tim Hortons adds to its Bagelbits selection with the release of the new Cinnamon Raisin Bagelbits.

As mentioned before, the Bagelbit, which is also available in Plain and Everything varieties, is basically a bagel version of Tim Hortons’ famous Timbits.

In addition to the new Cinnamon Raisin Bagelbits, Tim Hortons has also brought back its “Smile Cookie Campaign.”

100 percent of the proceeds from every Smile Cookie purchase are donated to charities in local communities such as Akron Children’s Hospital and The Children’s Foundation.

The Smile Cookie features a chocolate chunk cookie topped with pink and blue icing drawing out a smile.

It’s worth noting that the Smile Cookie Campaign runs through September 20, 2020, so if you want to donate, now is the time. 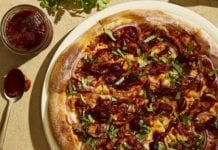 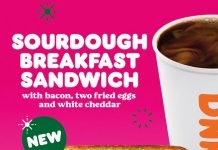