Chick-fil-A offers layers of bold flavors with the nationwide release of their new Grilled Spicy Chicken Deluxe Sandwich, which will be available at participating locations starting January 25, 2021.

Chick-fil-A’s new Grilled Spicy Deluxe features a boneless breast of grilled chicken marinated with a blend of peppers for a tender and spicy taste, served on a toasted multigrain brioche bun with Colby-Jack cheese, lettuce, and tomato. Served with Cilantro Lime Sauce.

The new sandwich incorporates a number of key ingredients such as the brand’s new Grilled Spicy Marinade and Colby-Jack cheese to give it a distinct flavor that’s unlike any other offering on the fast-food chain’s menu.

Along with the new sandwich, Chick-fil-A is also introducing a new, limited time Cilantro Lime Sauce that was specifically created for pairing with the Grilled Spicy Deluxe Sandwich. According to Chef Angela Wadlington, one of the chain’s senior culinary developers, this cool and creamy sauce “helps to take the edge off the heat while adding a final layer of flavor that brings all the ingredients together.”

In addition to the new Cilantro Lime Sauce, the company also recommends pairing it with Waffle Potato Fries, Mac & Cheese, or Kale Crunch Side because, according to Chick-fil-A, these are the top three sides that best complement the spicy sandwich.

The Grilled Spicy Chicken Deluxe Sandwich Sandwich will be available at participating locations across the country starting next week.

What are your thoughts on the Grilled Spicy Deluxe? Let us know in the comments below. 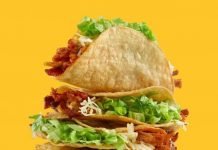