Over the years, Tim Hortons has released a series delicious breakfast wraps such as the Maple’s Farmer Wrap and the Chorizo Breakfast Wrap.

We tried the new breakfast menu items, and they’re even more delicious than the Maple’s Farmer and Chorizo options.

The chain’s new breakfast wraps are:

The Famer’s Loaded Breakfast Wrap features all the same ingredients, but it comes stuffed with melted Swiss cheese and hash brown sticks.

I only tried the Loaded Farmer’s Wrap, and it was a not too messy and also delicious eating experience.

Tim Hortons breakfast wraps are better than the ones at McDonald’s.

The wrap includes none of the chain’s sauces, but it’s not a dry sandwich at all, actually it’s moister than most fast food wraps.

Grilled to perfection, the tortilla does a great job binding ingredients together. I also loved the aftertaste of the Swiss cheese, which was slightly melted by the heat of sausage and bacon.

The packaging isn’t that great though. Sometimes the content of the wrap drips through the corners, which makes it a bit messy. Other than that, it’s an affordable breakfast menu item that’s also incredibly tasty.

Tim Hortons Loaded Farmer’s Breakfast Wrap is available at all locations for a suggested price of $5.79. Prices vary by location. 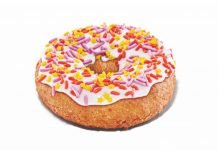 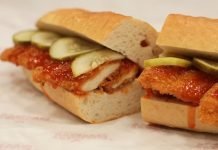